Home About Us Our Family

As Elite Roofing has thrived, employee retention has been the key to its success. Several members of staff have served the company for decades, further cultivating a familial environment, years after the retirement of the company’s founding family members.

Meet the frontline members of Elite Roofing, whose individual strengths, combined years of experience and passion for the industry make them the Greater Toronto Area’s most Elite team in roofing. Ike Glowinsky has loved the construction site for as far back as he can remember. After attending Ryerson University for Electronics, he made the decision to join Elite Roofing, his father’s company, in 1961. Although roofing was a business he knew well from his family, he started at an entry level as a roofing labourer—shoveling gravel and loading and unloading materials—until he learned all aspects of the trade and began working his way up the ladder.

Today, his job description includes customer relations and estimates; although, he views his most important responsibility as upholding the integrity of the business. Outside of the office and off the jobsite, he enjoys travelling the world with his wife Ruth of almost 50 years and spoiling their 9 grandchildren. He is also heavily involved in his Synagogue, a past president of B’nai B’rith Lodge and a volunteer for the Crohn’s and Colitis Foundation of Canada. A Chartered Accountant with a BA in Commerce and Finance from the University of Toronto, Howard Glowinsky decided if he was going to build a business, it would be his family’s business. Howard joined Elite Roofing in 1995.

Howard learned the roofing trade from his father, who fortunately, is still an active member of staff. Howard’s current responsibilities include scheduling, administration, estimating, sales, service, quality control and maintenance inspections. He devotes his spare time to his wife Claire and their four children, actively volunteering at his Synagogue, Chabad @ Flamingo, and serving on several charity boards and committees. Artur Prazmo has a professional motto he lives by: “Always view the project from the client’s perspective.” It is this attitude that has made him a valuable member of the Elite team since 1999. After graduating from Humber College as a Certified Civil Engineering Technologist, he gained experience in mining, land surveying and overall design. As such, if there is ever a difficult building to measure, Artur’s surveying skills make him the man for the job.

Another of Artur’s responsibilities is conducting safety training of staff, including such courses as WHMIS, Fall Protection and Propane. He also has strong IT skills and performs maintenance on the office computers. An avid skier, diver and hiker, Artur leads an active lifestyle with his wife Anna and their 2 children. He is also a director on the board of the Maximilian Kolbe Foundation, which supports the development and operation of the Pope John Paul II Polish-Canadian Cultural Centre. Miguel Marto was first introduced to Ike and Howard Glowinsky in 1996, by his father, who is also a long time employee of Elite Roofing and Contractors. In the summers of 1996 and 1997, Miguel worked for the company. After graduating from Humber College with a degree in Civil Engineering Environmental Studies, he became a full-time member of the Elite team in 2003.

Miguel’s role is that of a superintendent. He has exceptional communication skills, as well as the ability to speak both English and Portuguese fluently. He enjoys working with different trades, meeting new people and creating new friendships—but the best part of his job is doing something he can be proud of and in which his hard work shows in the end results. On his off days, Miguel can usually be found spending time with his wife Lisa and their son, working around the house or walking his two dogs, Smokey and Bandit. 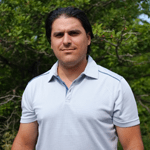 Roofing has always played a role in Nathan Altomare’s life. He vividly remembers accompanying his father and brother to work during summer breaks. After graduation, he worked as an Oracle trained mainframe database and system access administrator in the group life/health insurance industry. After a few years he decided to make a change. He partnered up with his father and brother and opened a roofing company. In this role he was responsible for all facets of the business, from financing to sales to employee relations. He joined Elite Roofing in 2015 in a sales and marketing role. His responsibilities also include administration of accounts on SalesForce.com as well as preparing and delivering presentations.

During his time off he enjoys travelling with his wife Angela. They both enjoy long driving trips across North America and Europe. Lois Leutri, our Office Manager, is one of the newest members of our team, joining the company in 2013. Lois supervises all accounting functions, primarily payroll and accounts payable, and also assists with preparing various documents, including quotes, tenant notices, etc. Lois has also co-ordinated first aid training for staff members and sub-contractors. Lois has a Legal Administration diploma from Seneca College, and has worked as a Law Clerk, and as an Office Manager/Bookkeeper in medical clinics and a valuation firm.
Lois enjoys being a problem-solver, and brings a positive cheerful attitude to everything she does. In her spare time, Lois enjoys spending time with her husband James and their two children. She also is an active volunteer with Girl Guides of Canada, running a busy Pathfinder unit of 24 girls, and as an Elder and Sunday School teacher for North Bramalea Presbyterian Church. Lois loves camping, hiking, cooking, singing, reading and playing with her two cats.

Cynthia Nunes joined the Elite Roofing team in 2015. She has worked in the accounting field for 10 years and oversees the accounts receivable, invoicing, service dispatch and general administration. Prior to working in accounting, Cynthia completed the Hotel & Restaurant management program at Humber College.

She spent time working and travelling in Europe and this experience has made her into a very perceptive, easy going and independent person. She spends her spare time with her son and loves to take him on new and exciting adventures. She also enjoys cooking, baking, travelling, volleyball, soccer and going to the beach. Cynthia speaks both Portuguese and Spanish.

“Adams and Waks Construction has been doing business with Elite Roofing for...

Elite Roofing and Contractors has provided us with quality workmanship, with either their roofing products or sheet metal installations. Their pricing has been very competitive.

Your firm’s achievement has dispelled the notion that providing roofing services is a one dimensional process. This project involved bringing together design professionals and specialty

We have been using Elite Roofing for almost 7 years now, and the service from their team has always been very responsive and effective. Quickly

We use Elite Roofing extensively and find them to be very responsive to our roofing needs and concerns, whether it be an emergency leak, walkthrough

Your firm’s achievement has dispelled the notion that providing roofing services is a one dimensional process. This project involved bringing together design professionals and specialty

We use Elite Roofing extensively and find them to be very responsive to our roofing needs and concerns, whether it be an emergency leak, walkthrough

I recently collaborated with Mr. Glowinsky and Elite Roofing on a 24-townhouse development project in downtown Toronto and I can honestly attest to the fact

“Adams and Waks Construction has been doing business with Elite Roofing for...

Elite Roofing and Contractors has provided us with quality workmanship, with either their roofing products or sheet metal installations. Their pricing has been very competitive.

We have been using Elite Roofing for almost 7 years now, and the service from their team has always been very responsive and effective. Quickly

I am writing in appreciation of the excellent job that was done to replace over 35,000 square feet of roof at one of our private schools located in Thornhill, ON.